The current snowfall and freezing temperatures have caused all sorts of caos, with disruption to schools, businesses and travel.

Exercising the horses has become difficult if not impossible but some entreprenurial people in Devon have come up with some very ingenious ways of beating the weather, exercising their horses and having a great deal of fun at the same time!

Follow their exploits on: http://www.extremehorseriding.com/HOME.htm
Posted by Britford Livery Stables at 01:28 No comments: 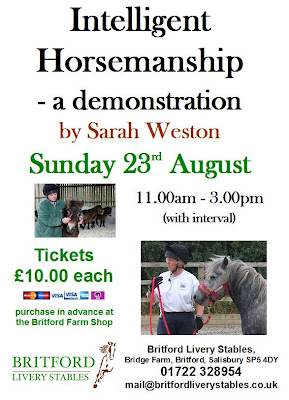 Using established principles of psychology and equine behaviour together with years of experience, Intelligent Horsemanship has become increasingly popular when dealing with problem horses.

Sympathetic to both horses and people Sarah Weston has helped horses and horse owners achieve a better understanding together and to achieve something of their their full potential.
Sunday 23rd August 2009
11.00am - 3.00pm (with interval)
Venue: Britford Livery Stables
Tickets £10.00 each. Tel: 01722 328954
In aid of the Laminitis Trust (reg charity; 1049266)
Posted by Britford Livery Stables at 04:50 No comments:

No Fear, No Force!

NO FEAR, NO FORCE - A new Book by Sarah Weston

“Sarah has an exceptional ability with unhandled and semi-feral ponies and a straightforward way of teaching others to work with them in the same way”.
Kelly Marks

Every foal should come with a copy of this book! Whether unhandled, manhandled or badly handled, this book enables anyone to tame and train their foal using techniques that create a lasting bond and real conﬁdence. Placing the emphasis on touch ﬁrst, the techniques describe a logical approach to establishing contact with your foal based on his own psychology without resorting to physical restraint.

The author, Sarah Weston, is a Recommended Associate of Intelligent Horsemanship, based in the New Forest.

“I wanted to devise a technique that would help wild foals to adjust to a domesticated life quickly so that they stood more chance of staying in their ﬁrst home and wouldn’t end up in a downward spiral; the techniques described in my book have worked with every breed of wild or nervous foal that I have worked with and for other people too.” SARAH WESTON

This book will create a new tradition in foal handling.
Profusely illustrated throughout in full colour.

You can order online through the NFED - CK Art Shop http://cksecure.co.uk/shop/product/no_fear_no_force/

How easy is carriage driving?

I was asked recently how easy is it to carriage drive?

The answer is, of-course, not straightforward.

You will notice that the most proficient of people always make even complex tasks look so easy. When someone remarked about Johnny Wilkinson's amazing luck scoring goals in rugby (even from angles and distances you would not think possible) a commentator replied that the more Johnny practiced the luckier he got!

It's not until you begin carriage driving do you realise how much is involved and how much you, as the driver, need to practice. Even developing the muscles to hold the reins correctly if you drive 'coachman' style - the seemingly one-handed style recommended by the British Driving Society - takes discipline and effort.

When I watch masters like George Bowman and John Parker carriage driving I realise how just easy they make it look, and they drive teams!

Carriage driving may not be as physically demanding as horse riding but it nevertheless demands a level of skill, particularly when driving on the roads, that even the most proficient rider would respect.
Posted by Britford Livery Stables at 07:05 No comments:

Autumn tasks around the yard...

What is going on with the weather!!!

I've been waiting to have one of our paddocks cut for hay for, what feels like, weeks now!

All those other odd jobs, like a new concrete pathway in the Horse Yard, have been put on hold too as the rain continues to fall.

To rug? Or, not to rug? That is the other question!

However, lets be positive about this, the upside is that the horses aren't being bothered by flies!
Posted by Britford Livery Stables at 06:48 No comments:

Introducing a newcomer to the herd

I'm not sure how other yards introduce newcomers into a herd but here we use a 'socialisation' paddock.

It's a small fenced area beside the field that the new boy or girl will be going into and where they stay for a week or so.

From this paddock all the horses are able to see one another, sniff and touch over the fence and all the squealing is dispensed with in relative safety.

We observe the behaviour of the newcomer and the herd when they interact to try and identify any potential problems or potential fieldmates. This time of socialisation, we find, gives the newcomer some idea of it's place in the hieracy and generally reduces the drama when the newcomer is finally introduced into the herd.

The socialisation paddock also gives the owner a chance to get to know the other horses and gives them a period of 'settling in' as well.

I am still under the impression there is nothing alive quite so beautiful as a thoroughbred horse.
Posted by Britford Livery Stables at 08:35 No comments: